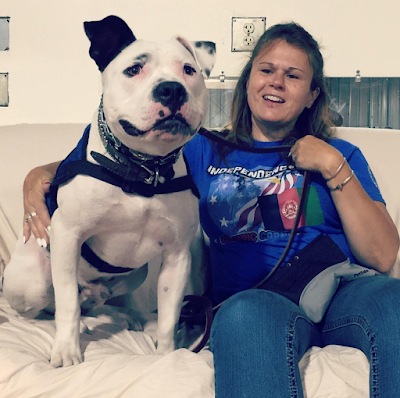 We couldn't be prouder of 'Barn Dog' graduate Chappy who first came to us from Contra Costa Animal Services and is now serving as a service dog for his adopter, Crystal.

Crystal is a war veteran and like so many coming home, she's challenged with navigating the world with debilitating post traumatic stress disorder (PTSD) from her time in Afghanistan.

Chappy provides comfort, but even more, his full time job is to keep close tabs on Crystal's emotional state and to signal to her when he notes that her stress is mounting to the point where she needs to sit down and regroup.

Chappy found his calling when Operation Freedom Paws came looking for a special dog for Crystal. They needed a dog who was comfortable with the world, relaxed around bigger distractions including other animals, and highly tuned in to people. They were also hoping for a snuggler with a goofy side to help lighten the mood when her painful migraines creep in.  As it turns out, this velcro clown had all the right stuff and took to his job almost immediately.

As a service dog who's been specifically trained for his job, his work is recognized by federal law and supported through the American Disabilities Act (ADA). He's allowed to accompany Crystal to all businesses open to the public, including restaurants, hotels, taxis, stores, hospitals and medical offices, theaters, etc.,as she moves about her day. Full time support. 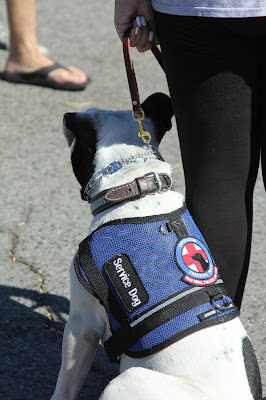 I asked Janet Wenholtz from Operation Freedom Paws to explain PTSD and how dogs can assist their owners:

"When a person has PTSD, s/he scans, constantly looking for that threat. The least movement or sound kicks in the "fight or flight" process, which adjusts body chemistry and body language. Adrenaline is as addictive as heroin, and for a lot of people, living in that state of anxiety becomes their normal. Their bodies never stop producing it, so they never truly relax. Even when they're asleep, they're having nightmares, and rarely sleep more than a few hours at a time. Then they're awake -sometimes for days.

Trauma physically changes the brain. Basically, the conscious mind loses much of its control over their brain's natural reactions. Someone with PTSD lives in a state of constant heightened anxiety. Life in general is just too overwhelming and overstimulating. This causes them to isolate, sometimes for decades at a time. If they go out, even to the grocery store, it's at 3:00 AM. Usually the only place they go during the day is to medical appointments, where they're usually given meds to help them sleep, wake up, cope with pain, etc. These can add to the problems, especially for vets whose VA docs don't always talk to each other about patients they have in common. Psychiatrists at the VA see their patients about every 3 months, if they're lucky. Most self-medicate as well, with alcohol and drugs on top of their meds. It's a very dangerous situation for them and the people around them." 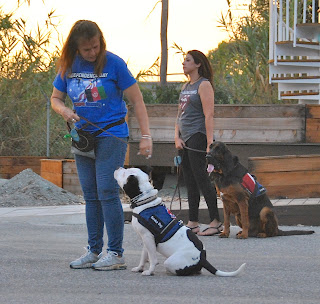 So where does the dog come in, and how does it help?

"First, when accepted to this program, they have to take the dog out for walks. We require in our contract that clients get out of their houses at least two hours a day, even if it's just to walk around the neighborhood. They have to be in our classes twice a week AND do their homework to solidify the skills they learn in class. And the dogs don't lie. We always know if they've been doing their homework or not, and we don't hesitate to call them out! This training is designed to create new habits to overcome the bad habits their brains & bodies have gotten into since they were injured.

During class, all of the instructors observe each team---the dog, the handler, and their interactions. If a dog is reluctant to do something we KNOW s/he knows how to do, we say, "What's your dog trying to tell you? Do your inventory. Are you in pain? Are you thinking about something you shouldn't be thinking about? Are you getting angry? Take five!"

When we visited class at OFP, we learned that some dogs will signal by nudging their people or by stalling out and blocking their path. Some will wake their handlers up from nightmares to comfort them. Each team works differently and relies on the dog's particular skills to surface as the pair begins to bond. One dog shoves socks into the hand of his person during particularly stressful episodes and another lies across his person's legs.

Below. After training drills, veterans practice what's called 'Doggy Yoga Hour' with their dogs and share personal triumphs from their week with the group. Yes, that's a bloodhound there! 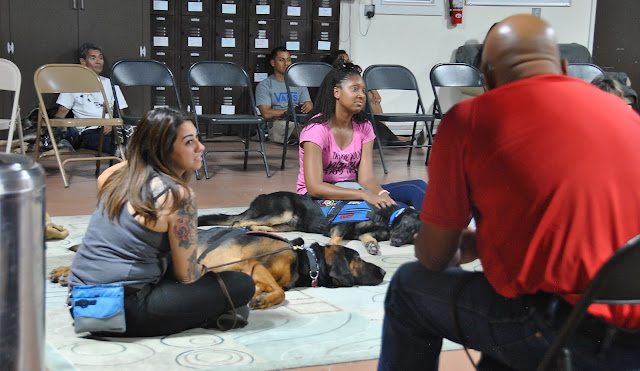 Chappy was more at home and happier than we've ever seen him when we visited. "He has a purpose now," said Mary Cortani, who started the program in 2010.

Yes, he does. What a gift this program is to our veterans who participate and to the dogs who are lucky enough to find their destiny through serving them.

NOTE: Mary was named as a Top 10 Heroes in 2012 by the CNN Heroes program that celebrates ordinary people making extraordinary contributions to improve the lives of others. Watch this link to learn more about the important and life changing work of Operation Freedom Paws: CNN
Posted by Donna at 9:44 AM

Such a wonderful story - both Chappy and Crystal deserve each other and deserve to be happy, supported and loved. I hope this story helps other blocky dogs find a way into homes that need them. Thank you BAD RAP for all your good works - for dogs AND humans.