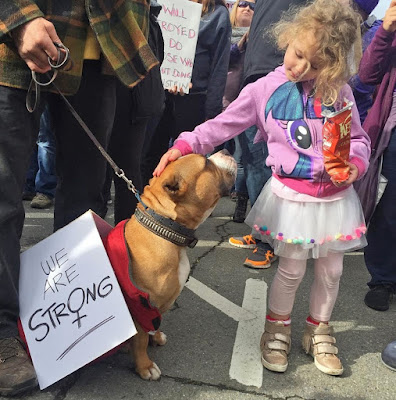 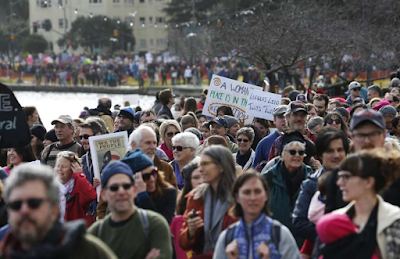 Donna -- This is a wonderful post. I will be sending it around to people I know, and especially to those who love animals (which is, luckily for me, most of the people I know!) It (this post) is particularly effective because you've combined passion with facts and logical argument: something that is increasingly rare these days.

This needed to be said and repeated and lived, and I thank you [passionately!] for all that y'all do.

Thank you! This encourages and motivates me during a stressful, painful time in this country. Plus, pics of adorable pittie babies always help.

You've captured the essence of what many are feeling. Thank you so much for writing this and for participating. My sister and her friends participated here in DC -- it was the biggest gathering I have ever seen in many years of activism. I think there were easily a million. And then yesterday, the huge banner that Greenpeace raised over downtown DC -- RESIST. So glad to see them come ashore and wave their freak flag on high.

Thanks for this! I also marched with my 4 year old son in our hometown of Kansas City, MO and it was heartwarming to see SO many people of all ages, races, and causes working together to share HOPE. Love to you all!

wonderfully said - keep up the fight!

What do we want? Safe, humane communities for all.
How do we get it? By acknowledging our neighbors' struggles. By taking a stand when fundamental human rights are threatened.

Thank you so much for putting into words what so many of us are feeling right now. We need to stand together for our neighbors, our companion animals and our entire country. United in purpose we can all have hope that indeed -- Yes, we can!

This post moved me to tears. Thank you for sharing.

Thank you for this blog. I've been so engaged in posting positive comments about the marches that i have neglected our own group, the Ontario "Pit Bull' Co-op. This blog puts every issue I care about together -Everything we fight for every day. I have been trying to get people to see that injustice to our dogs and injustice to people, Injustice to our planet are intrinsically linked and you have done this for me with this powerful piece. Thank you from the bottom of my Socially Conscience Heart !!!

Thank you. As an animal advocate I have long said it isn't just about the animals.

Surprised anyone would question why you marched. Thank you for supporting humanity!