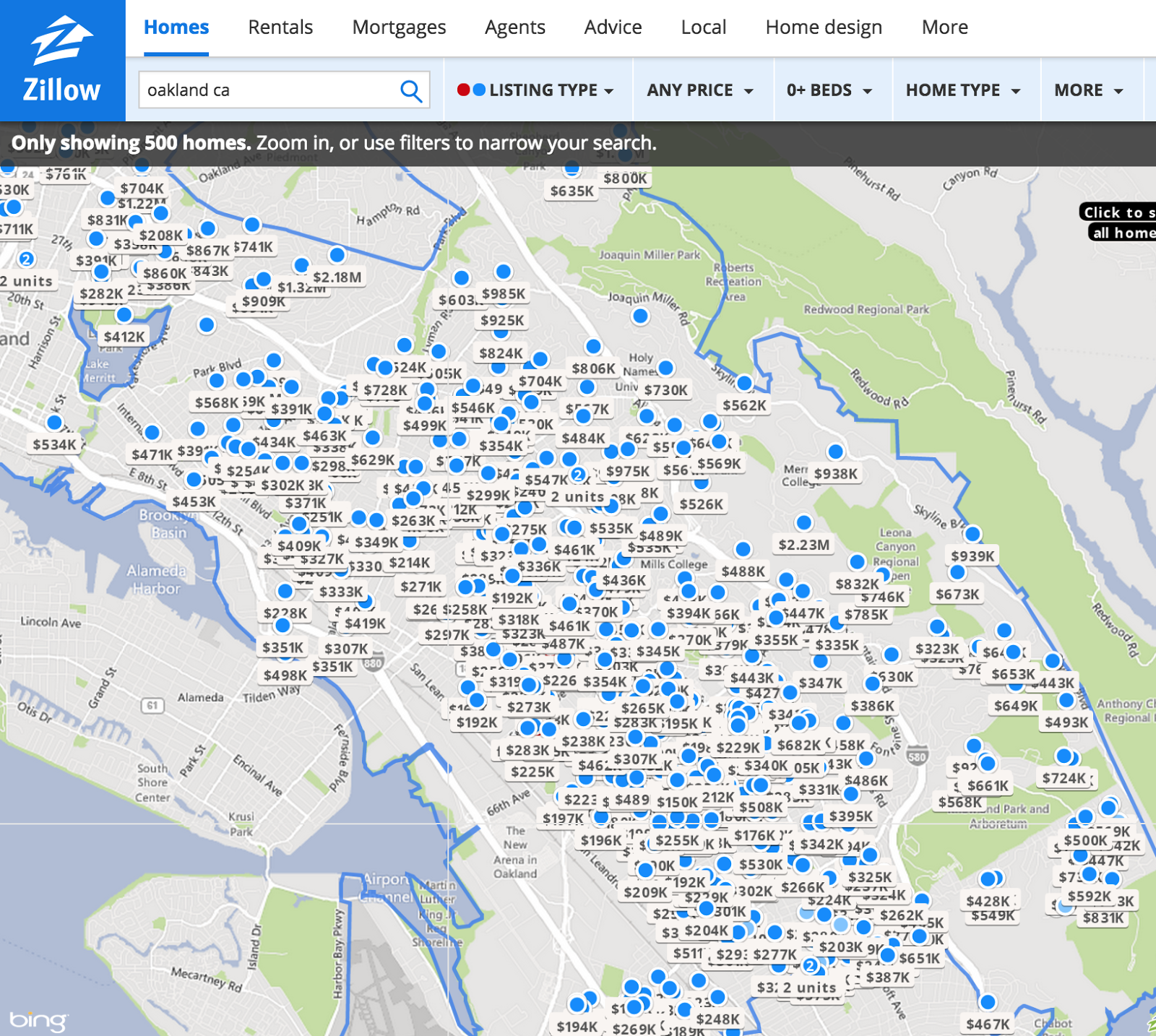 First the bad news. This map shows the number of bank owned (foreclosed) homes being offered for sale this week in just one slice of Oakland - East Oakland, to be exact. (Source: Zillow) It's a shocking graphic that grows as the map reveals more pieces of the hardest hit parts of the SF east bay.

Behind every blue dot is a displaced family and/or an evicted tenant. Approximately 47% of those homes likely owned one or more dogs and/or cats when they were told they had to move. (That figure comes from the American Pet Products Association, who likes to keep tabs on the number of American families who own pets). Where did all those families and all those pets go? Many have been heading east, in search of affordable living. Faced with a dearth of pet friendly rentals, thousands are forced to leave their pets behind every year. In Oakland, where pit bulls have traditionally been among the top three most popular breeds, we can practically draw a straight line from every other blue dot to Oakland Animal Services. Or, hundreds of straight lines.

Contrary to popular stereotypes, SF Bay Area pit bulls aren't filling shelters because there are 'too many' of them, or they're 'too unwanted' or 'too difficult' to own. Instead, many if not most were well loved dogs who've simply been displaced, right along with their humans.

“Of those who gave up their animals, the most common reason cited was that the landlord or place of residence did not allow dogs or cats.” - American Humane Association Report 'Keeping Pets (Dogs and Cats) in Homes: A Three-Phase Retention Study' 2012

Many of the blue dot dogs also reflect the lack of affordable training resources in these same communities, so are doubly challenged by a lack of basic manners when they land in the shelters. In a market oversaturated with dogs-in-need, the well mannered dogs are understandably cherry picked for adoption programs, leaving the dogs with caveman manners at a much higher risk of euthanasia. 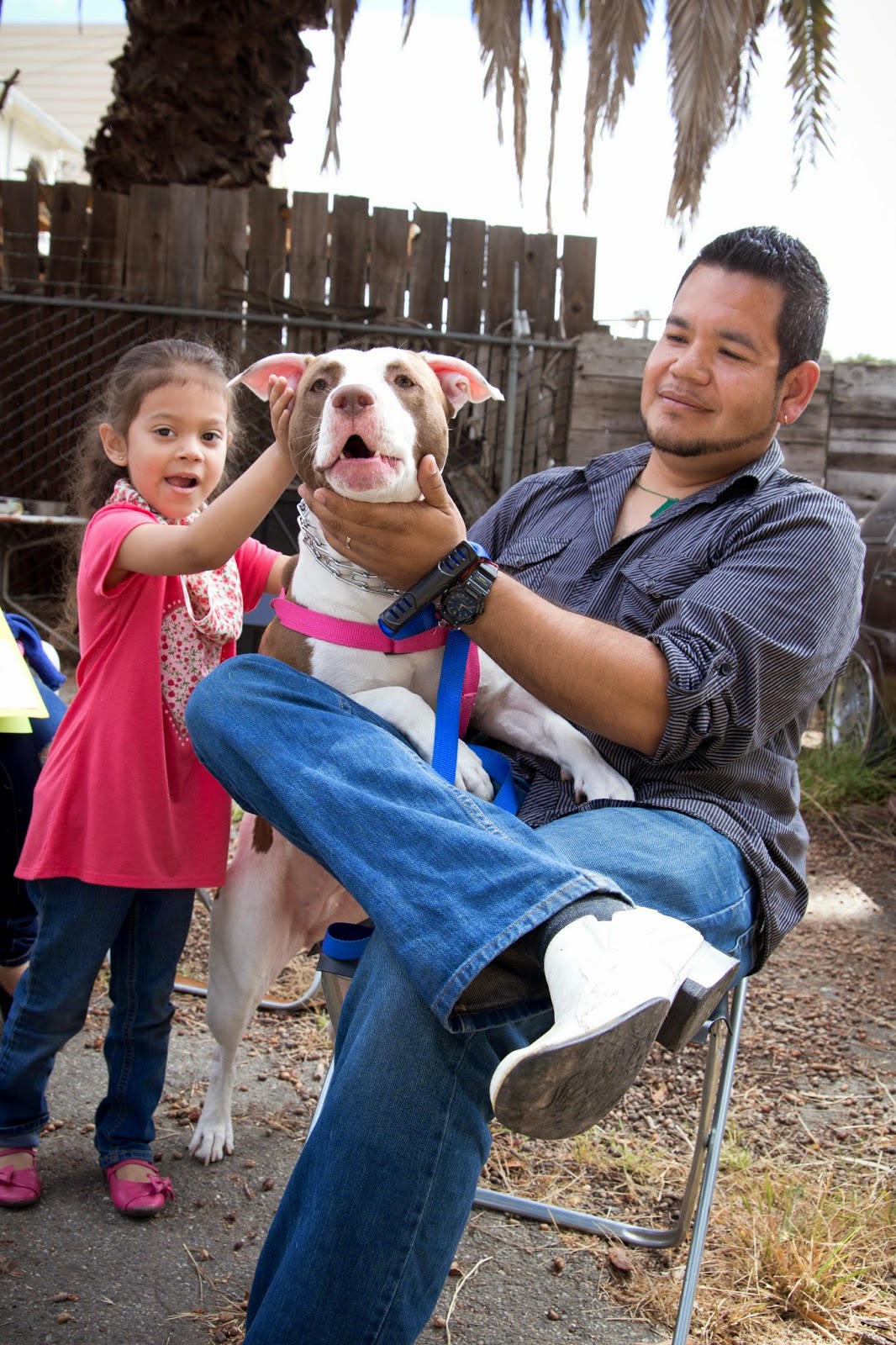 Dealing with the aftermath of the economic trends and housing shortages has vexed animal shelter workers for over a decade, even while live release rates are closely scrutinized by a public hungry for 'save them all' successes.

Successes are within reach but can be hard to sustain, and it's not uncommon for frustrated critics to place blame on surrendering families for not trying harder to keep their pets or at animal shelters for not trying harder to attract new homes. To their credit, shelters have increased adoption rates for pit bulls and other dogs substantially over the years all around the country (news link). Yet the intake numbers have have held steady.

What's a shelter to do?

In a very real sense - until and unless the flow of displaced pets slows - any animal shelter's best defense to the perennial intake of larger dogs is to keep their marketing skills sharp and social media pages humming so well resourced families can be attracted to the same dogs their less fortunate neighbors were forced to give up. Rather depressing, but true.

So What's the Good News?

The good news is that many in the animal welfare field are finally rubbing their eyes awake to the bigger picture. Under resourced dog owners shouldn't be written off as bad guys, and 'Owner Support' programs that honor the human-animal bond are finding their legs. Inventing new ways to keep challenged dogs in their homes is becoming the in-vogue topic at animal welfare conferences and even publications like Dodo, which ran this article early in the week.

Understanding the key causes behind high shelter intake numbers doesn't always afford us easy solutions, however. At times, the reality of homeless dogs can seem so overwhelming - It may have almost been easier for animal lovers to believe that the majority of pit bull owners were irresponsible and required policing, as San Francisco and other cities have done.

But we're smarter than that now, and hopefully more compassionate. Or at least, we know we're supposed to be.

Photo credit: Chris Arson. An Oakland family comes to a 2014 BADRAP owner support event to have their dog spayed.

I was shocked by that first photo, because the economy is really improving, so I actually went on Zillow and searched for foreclosure and pre-foreclosure homes in Oakland, and there were plenty (over a 100) but not nearly as many as your visual seems to show? What am I missing? In my neighborhood in Oakland (not a great neighborhood, definitely not the toughest), houses are almost back to early 2008 values now and foreclosures are way down from where they were a few years ago.

Regardless, it is still a sad reality that many dogowners are forced to give up their beautiful dogs involuntarily when they lose their home, and I strongly support providing dog owners (rich and poor!) with as much support as possible. Thanks for all your hard work.


Hi Inderific. We agree that the graphic is shocking and almost unbelievable. Zillow currently has 480 homes in Oakland listed as foreclosure sale or auction as of today (April 20, 2015). You can Google that info from any city by pulling up 'Zillow + Foreclosures + Name/City'

What the 'blue dots' can't show you is the full number homes that are bank owned by not on the market right now. Banks have been forced to release just a portion of foreclosure homes at a time in order to control the market some (the pricing, actually)