finding Penny - lessons from a misadventure

Chris and Tina van Wolbeck sent a donation this week in honor of Kate and Marshall Reed's recent kindness. What did the Reeds do to inspire such a generous gift to the dogs? Chris tells the story himself, along with the lessons that came out of a very scary experience.

My wife Tina and I recently learned a lot about what to do if a dog goes missing. I am writing this in hopes that it may help someone else who loses their dog.

On Saturday, September 24, 2011 we were camping in the Lakes Basin area in the Sierra Nevada Mountains. We left Penny, our beloved pit bull mix, behind to watch our motor home while we went for a hike. When we came back we found that she had escaped through a window. Penny came to us from the Oakland Animal Shelter, so we don’t know what her previous life was like but we do know that she is very shy and depends heavily upon us for her emotional stability. I believe that she escaped to come looking for us. She didn’t find us for six days.

We were devastated when we found her missing and immediately began searching the area for tracks and calling her name until we were hoarse. When it became apparent that she was nowhere nearby, we widened the search area and began putting up signs at campgrounds, stores, post offices, turnouts and everyplace where we thought people might see them. We did this until 1 a.m., when we decided that we had covered an area wider than we believed she could cover in that amount of time. Sunday morning, we resumed the search and widened the area to about a 30 mile radius, putting many, many more signs out and talking to everyone who would listen. There is no cell service up there, so we didn’t get the message until about 5 pm that the Sierra County Sheriff’s officer and two other people had seen Penny at about 9 am, about 5 or 6 miles away from where she disappeared. We immediately went to the area and began calling again. We didn’t find her.

We were supposed to be back at work on Monday but took another day off to look for her. We couldn’t bear the thought of leaving her up there. Penny has very short fur and gets cold easily, even inside the house. We moved our motor home to the area where she was last seen. We visited every house in the area where people were home and continued calling her. We left that afternoon to come home. There had been no more sightings of Penny and knowing that she was lost in an area strange to her and that there are mountain lions and curvy roads with cars, we feared the worst.

On Tuesday I went back to my job as a high school teacher and told some of my colleagues about what had happened. Many of them encouraged us and told us not to give up and were sure that we would find her. I was not so sure.

One very helpful and compassionate couple, Jeff Torquemada and his wife Wendy know Penny and know what a wonderful dog she is. Wendy left Wednesday morning and spent two days searching for her. There were still no more reported sightings.

My friend, Chad Cochran spent hours on the internet, checking with animal control and shelters within a very large area. He actually found a dog in Reno who looked remarkably like Penny.

On Friday morning, my friend and Colleague, Don VanNess and I left to resume the search. Tina was planning to come up after work. We lost cell phone service at about 11:00 am. We began retracing the route which we thought Penny took from our campsite to the area where she was last seen. When we got to higher elevation, we got into cell phone range and I had two messages. The first one was from Kate Reed, who has a cabin about one half mile from where Penny was last seen. She had Penny. We called and got no answer. I listened to the second message and it was the sheriff’s office informing us that Kate had dropped Penny off there. Through the small town grapevine, our friends Glenn and Irmke, who live in Sierra City, six or seven miles away from where Penny was found, had already heard that the sheriff had her. They beat us to the sheriff’s office by ten minutes. Eventually we caught up with each other and we were reunited with Penny. Below - Penny with Chris and Tina's grandson Max. 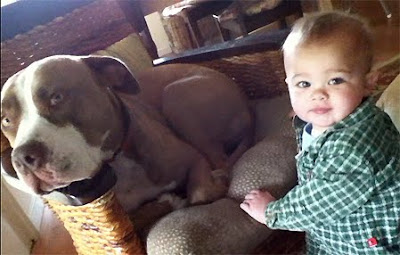 So what did Penny teach us by getting lost? The first and most important thing is to get the message out as quickly and to as many people as possible that your dog is missing. Kate knew exactly who was on her porch Friday morning because she had seen one of our signs. We had given the sheriff’s office our phone number and a description of Penny, so they were familiar with the situation. Also make sure that local animal control offices and animal shelters have her description. The second thing and also very important is don’t give up. Keep looking and keep your dog fresh in people’s minds. Third is, rely on your friends for support and help. Don was absolutely sure that we would find her and we did. That kind of positive energy can only help! Fourth is get your dog a distinctive looking collar. The easiest thing to describe about her was her orange collar with daisies. Fifth is to make sure that your dog is micro chipped, so that if the collar is lost your dog can still be identified.

I have made a donation to Bad Rap in Kate and Marshall Reed’s honor. If they had not taken the time and effort to win Penny’s confidence, she would probably still be lost and it is snowing up there as I write this. - Chris van Wolbeck
__________________

Good work, everyone. We appreciate you sharing these important lessons - and huge props to everyone who stayed so determined to find sweet Penny, despite the insurmountable odds. In the spirit of helping more lost souls find their way home, your thoughtful gift is earmarked for a special stray on his way into our program. We'll holler when he gets here!
Posted by Donna at 9:51 PM

This story is amazing, what a wonderful end. I felt the panic in my own stomach until I knew the outcome, and I've never even met beautiful Penny. I'm thankful!!!! Sarah (fan in NYC)

Now, before they are lost, would be a good time to take some really clear photos.
Put aside some things with her smell on them - a favorite sweater, her brush with some fur on it.
Then if you need to use a tracking dog you are ready. There is a family in DC who have been looking for their beagle who was lost in April. They know she is still out there as sightings are confirmed (or not) by Sam and Salsa. This is the same team I went out with three times looking for our lost dog in 2009. Salsa is a cadaver dog re-purposed as a pet finder.

They've been on the Today Show and Anderson Cooper!

And congrats on getting Penny back so quickly. There is a whole world of dog lovers who step forward when a dog is lost.

So very glad you found Penny. I have had dogs sneak out a door or unexpectedly yank a leash out of my hand and though these were very short "lost" times, I still know that panic in the pit of your stomach when your dog is loose and not safe. Thank you to everyone who helped find Penny!

The Find Sassafras story made me think of a similar story in my neck of the woods up here in the Boston area, Marisol, who has been lost near a large park area for almost a year now I believe. It's heartbreaking that she hasn't been found yet.

I hope Marisol, Sassafras, and all the other lost pets out there find their way home to safety.

So funny that you posted this. Just this weekend, I caught two mixey terriers (airdale? irish? dunno) running around Arlington Blvd in the Kensington. One of them was really, really skittish, so it was a miracle that I caught her (with the help of a very helpful, sweet 12yo boy from the neighborhood).

It made me think of my Stella and how shy she can be with some strangers. I went right home and started working again on the 'come' command and then brought her out for some socialization. This kind of thing reminds us not only that we need to get the word out, but that--while we do all we can to prevent such stuff--we also need to do all we can to prepare the dingos to put the odds in their own favor should they get out on their own unplanned adventure.

Lost dog stories make my heart drop. I love pit bulls, but shelties are my breed of choice - this link - though sheltie specific, has some good ideas about finding lost dogs - http://jacksonvillesheltierescue.org/page8.htm

Again, some of the thoughts might not pertain if your dog is the super friendly goes up to everyone type, but for those who tend to be on the shyer side, it might help. Ditto on what Dianne said - take clear photos at least every six months because dogs do change appearance, and make sure you have a side and front view that show distinctive markings.

And again, thank goodness about Penny. And so nice they're paying it forward!

Yes, we spent most of Saturday taking down every sign we put up.

One tip to add for when you find a lost dog; if it is microchipped, be sure to ask the chip company not only who the dog is registered to (and their phone number), but also what organization did the chip insertion. I found a lost Pit Bull last month whose chip had an out of date owner's phone number, but the chip company also told me the local Humane Society had installed the chip, and they actually had a current number. The dog made it home because of this.

My 12 YO rat terrier mix escaped the yard and disappeared. I live right on a very large city park. I looked, I called I got help we all looked and called and I cried and I kept walking and calling and crying. At 3 am I came home, by five am I had made posters, posted lost dog reward four different places on Craigslist, lost report at Animal Care, and the Local Humane Society, AND print and online ads in the local paper. (i paid extra to add picture). My beloved pet had gotten frightened by some lightening, and while on her adventure, CHOSE a young man to take care of her. She had followed him and insisted he care for her by jumping into his car when he tried to leave. The kind young man returned her to me, and commented that I had certainly made it easy for him to find me. I believe I aged two years that night. this just happened two weeks ago. We are very lucky you and I and Mini and Penny!!