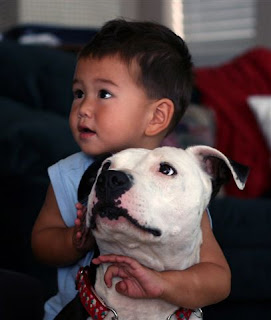 Somehow, the media monster has created a climate wherein perfectly nice folks can be out enjoying a perfectly nice day with their perfectly nice pit bull, and they suddenly receive an unsolicited editorial from someone with kids.

Or worse, they're with their own kids, who suddenly get an earful from a perfect stranger criticizing their parenting skills - and their best pal! What gives? This kind of rudeness doesn't happen to folks who have other large-breed dogs with children, but somehow society has decided that it's entirely acceptable for a perfect stranger to provide his or her own unsolicited and ill-informed public service announcement to anyone who will listen whenever there's a pit bull out and about and anywhere near a child.

At a local festival, my own dog Gunther had just been set upon by a group of rowdy toddlers (he rolled around on his back for belly rubs in the grass - his favorite thing), when my trip for a first beer led to him almost being run down by yet another wee human on an out-of-control Big Wheel. Being the cool cucumber Gunther is, he just sort of looked at me like, "Um - Mom? I think that kid needs some help." So I put my foot out to prevent the toddler from taking a tumble off the curb, and as I was doing so some random guy walked by with his wife and, very loudly to everyone (but not looking directly at me), said, "Yeah, that's a GREAT idea, having a dog like THAT around CHILDREN!"

Snappy retorts and actual education escaped me at that moment, I'm sorry to say. I did manage to fit in something not fit for print (or young ears, regrettably) - hey, we're only human. (And the young ears in question were being commandeered by Mom, who'd suddenly realized that her youngster's motor skills might not be honed enough to maneuver his fly plastic ride through the madding crowd...)

In any case, the simple fact of the matter is: normal pit bulls adore children. And, we're pleased to say, lots of children adore dogs - and pit bulls are just dogs, after all. 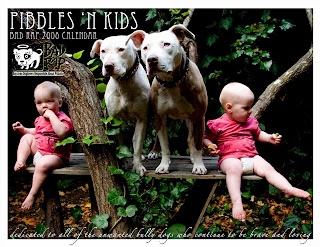 So, for everyone who's had to endure a lecture about endangering their children or someone else's simply because of their choice of family pet, we have the perfect holiday gift for you, which we tentatively entitled: 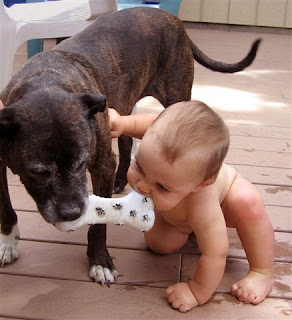 That was the working title, anyway. It didn't fit on the cover particularly well, so we went with Pibbles 'n Kids.

Heartfelt thanks go out to all the families that so generously donated their time - and kids! - to this calendar project. Most the dogs in the calendar are Bad Rap alums, but there's a couple shots sent in by some supporters that were so amazing that we just had to use them.

So, for those of you who want a G-rated pit bull calendar for next year's date-keeping, this one's for y'all. We think it makes a great stocking stuffer for anyone who's ever given you grief about your best pal - and yes, that includes your mother-in-law.

Great blog, Leslie! Thanks for the super defense of our sweet pit bulls.

What do you suppose it would take to have some of these fabulous photos of these wonderful breed ambassadors and their adoring pint-sized fans to be plastered onto billboards around town?

Fabulous idea Leslie...the pics are superb...I will be buying 10 of them to give out to naysayers and lovers-of-bullies alike.

You guys outdid yourselves this year!

PS Will particuarly enjoy sending it to a relative who feels it necessary to send me every ill-conceived, distorted and outright false piece of BS that he finds in his local papers in South Carolina!

I agree. My pit bull is great around kids. He is very calm and gentle. There are many myths about pit bulls that need to be dispelled. Before backyard breeding and underground dog fighting really led to the reputation they have today, they were considered one of the best family dogs!

I have some wonderful photos of my son Nicholas, when he was a toddler playing with his best buddy, a pit bull named Bane! Are you accepting submissions?