This photo showed up in my inbox just when I needed a little blast of Squeek Power.

The wee dog you see here came into Oakland Animal Services during an especially busy week a few months ago. An especially busy week means fewer kennels are available, which means dogs with minor behavior quirks are much less likely to make the cut during evals. When we first met this girl-who-was-not-yet-named, her kennel card had a '4' circled, which meant she was not long for this world.

Besides being friggin' adorable, she was clearly under-socialized and a little timid. Not bad, but not great. She was one of those grey area dogs that twist our stomachs in knots because they just aren't popping a flashing green light for 'sure-bet-shelter-adoption,' but they're almost impossible to walk away from. After spending some time scratching our heads over her, we marked her as a BR dog to save her life. She was young, she was impressionable, she loved to be touched, she was great with dogs. Issues? Very likely, but we'll cross that bridge when we get there. As is so often the case with this work: "Plug nose, Jump in." 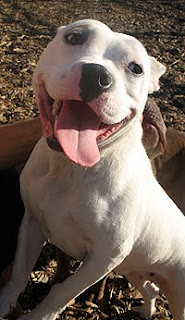 It wasn't too long before our impressionable little girl was feeding off of the stress in the shelter and picking up some way-naughty lessons from her neighbor dogs. While taking her back to her kennel one day, she reared up, pulled her lips back and SQUEEKED out a roar at a dog who dared look at her funny. Cute, but not exactly the path we wanted her to take. So Squeeks got VERY lucky and scored herself a foster home who volunteered to help get the quirky little pit bull out of the shelter and on to the right track in the real world.

Her foster mom (Cindy) reported back when Squeeks squeeked at a scary stranger and again when she spit at a dog, and Rep Linda worked out gameplans and protocol to help guide them both along. Cindy did the long drive every week to smooth out leash manners in Pit Ed class and she exposed her to a world full of people scary and not so scary. Squeeks enjoyed her first ever stable home that included a big sister dog to emulate, and she learned about chase-n-tickle games with her foster dad Neal.

Our project pup finally realized that she wasn't going to get eaten in this big new world, especially by the likes of Jeremy and Gaytha, who fell in love and wanted to make her theirs. They had a hell of a time with their landlord on this one, but that's a whole other story. Long story short, they were victorious over the landlord's jitters and Squeeks is home for good. Her photo with Jeremy almost makes it all look so very easy.

My favorite part of this story, besides her happy ending of course, is that Squeeks was saved because a handful of people including and especially her foster mom and Rep Linda were able to get her out of a situation where she would have disintegrated into a stereotype, and right into a setting where she could blossom. It worked. Once timid stray is now a flirtatious ambassador for her breed. And just as her original humans were once responsible for making her a creature to be wary of, a whole new set of humans were responsible for making her a treasured Daddy's girl.

what a lovely little girl!!

excuse me while i get all teary eyed.

I love these stories. Thank you.

Okay, just teared up a little at this. Thank you for sharing.

Oh, man, I wish you'd gotten a clip of that squeek! Thanks for saving her. Fear aggression in sweet girls like this is just more proof to me that there is no intelligent design.

This gives me so much hope. Sometimes we are so on the fence with a dog, but are gut tells us there is something there worth fighting for. Just dig a little deeper and find the shining light. We recently had a sit down to discuss whether or not to let a really sweet girl go. She was starting to fall apart in the kennel and she was really shy. Our last resort was using another dog to bring her out of her shell. It worked, she went home. She is greeting other people as long as her buddy is by her side. She is now in a great home and doing great. It's blogs like these when we are on the fence that helps us to take that chance. When I look at your available dogs I think they are all perfect, when of couse that's not very likely. I appreciate you posting about the not so perfect ones as it gives us hope and inspiration to stand up and fight for the ones that normally would have been passed over.

I love the fact that Squeeks, with a lot of love and attention, and training, became a wonderful pet. How many other dogs in shelters, that don't score well on their initial eval, have the potential to blossom? Probably closer to "all" than "none".

beautiful dog. this story just made my day.

Congrats to Jeremey and Gaytha on their new baby! I confess I had a HUGE crush on Squeeks based on her online profile. I love me some runty, bratty pit bull princesses.

what a great story! congrats to the new family, and a resounding "great job" (in our house that would be long howl from our 5 year old female pit, Pty) to the foster parents and bad-rappers who gave her a second chance!

Never ceases to amaze me all the good BAD RAP and their extended family do. Crying at work, however, is bad.

Hooray for Squeaks! Fills us up with hope again! When time permits (hah!) would love to see the protocol used to help bring Squeaks around!

Jeremy and I feel truly blessed and lucky to have this little princess pit in our family. She's so well behaved, loving, and absolutely eager to please and play. Her shyness is diminishing day by day, and her manners are being polished Squeeky clean. We're ever-so thankful for the big-hearted foster parents and the time and faith they put into her. Squeeks changed our lives so much, and we love her for it!

Pit Princess indeed! I know Gaytha and Jeremy and now I know and love Squeeks! Thank all of you for making it possible for my friends to have a dog that they adore. She is a wonderful little gal who puts a smile on anyones face who sees her.

anon 11:39, I'll check to see if Linda has time to do a little write-up on her and Cindy's approach to bringing Miss Squeekers around.

Gaytha, you guys are our heroes for your perseverance and devotion. Wish we could clone you both!

here is squeeks at play. i'd show you a video of her at work, but well she's a princess, and princesses don't work.

This is what it is all about and that picture serves as great reminder. Driving a foster pittie to a permanent home with a dear friend of mine in North Carolina (from NYC) tomorrow - pray for the snow gods to boycott the expected snow!

Oh my goodness...look at the li'l pink belly in the top pic...just want to eat her up!

Amen. And singing hallelujah for SQUEEKS. Here's hoping for many more stories like hers. Especially here in the bleep bleep bleep.

Donna - Thank you for the beautiful story (I'm crying my eyes out here.)
Neil and I also feel truly blessed for having the honor of being Squeeks foster parents. Our lives have been forever enriched because of a funny little dog named Squeeks.
Thank you Gaytha & Jeremy for giving her a wonderful and loving home.

Thank you ALL for being in this world. We lived in the San Antonio neighborhood of Oakland some years ago and took in one of the many(sadly) dumped dogs. She was a lovely pit mix we named Lola. She was the snuggliest, warmest, most beautiful (inside And ou) dog I have ever had the privilege of living with, but she was very fear aggressive and ended up nipping a small child at fort funston. We tried everything we could, but groups like yours were not around. I miss my Lola-girl everyday and she will never leave the core of my heart. Thanks for listening, and, right on, sister Squeeks!