A Slice of Summer

A little peek into the goings-on at the Rescue Barn this summer.

Three of the pups are mixed-breed dogs who were found emaciated and sickly, but are now bouncing back. The husky-x pup - 'Chessa' - came from a breeder who has asked for help with placement and spay/neuter for Chessa's parent dogs. Adult pit bulls Snorkles and Mila make an appearance, as well as mentor dogs Eddie (pit bull) and Elliot and Billie (husky/shepherd mixes). Finally, in the last slide, is the tiny 'Lily,' who is new to our program. All photo credits go to Kathy Kinnear.

Taking on the city: One way to get rabies exemptions for sick dogs 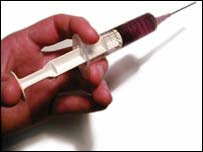 EDIT: This blog post was originally published in 2010. We hope this information is helpful to dog owners with questions about rabies exemptions for their dogs.

Several years ago, shortly after getting her vaccinations at a boarding kennel, our pit bull Sally experienced an immuno-collapse that sucked the life out of her and scared the hec out of us. Our once outrageously vivacious pit bull melted into a lethargic lump of swollen glands who could barely raise her head. She developed mast cell cancer soon after. Talk about owner guilt. Although she slowly recovered and has been boosted greatly with diet and holistic care, we decided to stop giving our sick girl her vaccines. None. Our vet fully supports our decision, although we are, technically, breaking the law.

While we need to keep our pet population healthy with standard immunizations, the question has come up: How much is too much? Christie Keith reported on the growing awareness of the downfalls of over vaccinating dogs recently in the SFGate. More and more dog owners are willing to curb some or all of their dog's vaccines - for chronically sick dogs especially - but the decision to stop rabies vaccines makes outlaws out of us in places where rabies renewal is mandated by law.

Solving this conundrum has to involve amending our animal laws to include exceptions, which is a tall order. This is why we were so impressed when one of our longtime friends - Susi Allen of Monterey - took on her city in order to save her sick dog from a potentially damaging requirement.

Susi's dog Bunny (above) was diagnosed with chronic colitis shortly after being adopted from an east bay shelter. Treating this uncomfortable disorder - which is an inflammation of the large intestine - can involve an exhausting search for solutions with frustrating set backs as the condition cycles through repeat flare ups. Susi found help with nutritional therapy, but she and her veterinarian both felt that a rabies vaccine would exacerbate Bunny's symptoms and make her sick all over again, so Susi decided to skip the shot when she was due. The problem was, Bunny's vet was powerless to help Susi sidestep the law that mandates rabies renewal for all dogs in her city. That's when this pit bull mama got busy. She was kind enough to outline her adventures with local legislation with us ...

"I contacted Dr. Ila Davis, Supervising Veterinarian for Monterey County, to ask about obtaining a medical exemption from the rabies vaccine. Dr. Davis was very sympathetic, but said a rabies titer would not be accepted in lieu of a vaccine shot. So I contacted the City of Monterey Animal Control Officer, Cathi Cristobal, and explained the situation. Not only did she completely understand the situation, she said she would accept a letter from my vet indicating a vaccine could be detrimental to Bunny’s health in lieu of a current rabies certificate and issue Bunny a one year dog license. 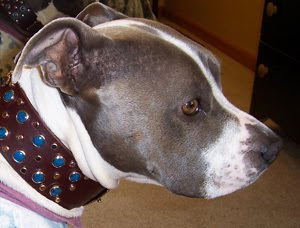 About a month prior to the dog license renewal, Bunny was given a rabies titer, which resulted in a 1:95 reading. The Centers for Disease Control considers a result of 1:5 to be adequate in humans. This was a 50 lb. dog with a 1:95! My vet wrote a letter attesting to Bunny’s health and requesting exemption from any further rabies vaccines.

I took a copy of the letter, the titer results and my dog license renewal notice to the city Finance Department and was told they would not issue the $9.00 dog license without the rabies certificate. There was nothing AC Officer Cristobal could do. At this point I decided my only option was to PANIC! I had to either have my dog injected with a vaccine that could potentially exacerbate her already severe medical condition (or potentially kill her), OR I could not license her and run the risk of having her confiscated under city ordinance for having an unlicensed, unvaccinated dog.

Officer Cristobal suggested I appear before the City Council, requesting an exemption to the city ordinance requiring rabies vaccines. I couldn’t do it because then I’m calling attention to the fact that I have an unlicensed dog and am violating the current city ordinance. And did I mention Bunny is a pit bull?"

Susi red flagged an email to Gary Tiscornia, Executive Director of the SPCA for Monterey County, asking for advice. She said, "He responded with several suggestions, one of which Dr. Carol Iida, the SPCA vet suggested: contact the state vet, Dr. Ben Sun. Amanda Mouisset, the Animal Behaviorist at the SPCA (and my supervisor), mentioned legislation she recently heard about which would allow an exemption from the rabies vaccine for sick animals: AB2000. After reseaching AB2000, I contacted Dr. W. Jean Dodds (Rabies Challenge Fund). Dr. Dodds was sympathetic but told me that even dogs with terminal cancer were not exempt from the vaccine. Her website states it’s possible to obtain a waiver from the vaccine, although they are often not permitted regardless of the justification. Dr. Dodds provided me with additional research material but not a lot of hope.

I contacted Dr. Ben Sun, the State Public Health Veterinarian, to explain my situation and ask, at Dr. Iida’s suggestion, how he felt AB2000 would be implemented if passed. I also asked about the rabies vaccine itself, which the manufacturers state should only be administered to healthy animals: what conditions or symptoms need to be present to constitute a legally un-healthy animal to which the rabies vaccine should not be given? I had read some of Dr. Sun’s work and knew he didn’t hold titer results in high regard.

Dr. Sun responded quickly and provided a lot of interesting, thought-provoking information. He said he was not aware of a list of diseases or conditions that would be a contraindication to rabies vaccine. There’s that Catch 22 again: the manufacturers of the vaccines state it must only be administered to healthy animals, BUT there is no method of defining a legal unhealthy, and thus, exempt, animal.

After a few more emails, Dr. Sun told me there were several cities/counties in the state that have exemption ordinances. What? Really? He gave me the list and I contacted AC Officer Cristobal, who had now announced her impending retirement. I volunteered to collect the information if she thought it would help. Within a day, I dropped off a large package of information for her at the Monterey PD, containing each localities’ ordinance highlighted and a suggestion that the exempted dog not be confined to the owner’s property, but allowed in public under constant restraint (a leash).

Officer Cristobal sent me an email stating Deputy Chief Phil Penko was drafting an ordinance for presentation to the City Council. A few days later she sent me a copy of the draft. It would be heard at the May 4th meeting, the day after Officer Cristobal retires. I attended the City Council meeting and the exemption ordinance was a consent item. The Mayor asked if any of the council members objected to any of the consent items, and no one objected to the proposed ordinance….so then it needed to be heard again at the next council meeting. I attended that one also on May 18th. Again, nobody objected and it passed! It passed. I still am in shock….it passed!

I have an email from Deputy Chief Penko stating Bunny is covered under the new ordinance and am awaiting a letter from the Police Chief. I carry a copy of the ordinance, the email from DC Penko, the letter from my vet and the titer results with me whenever I walk Bunny. There are duplicate copies in the glove box of the car. ..."

Shortly after writing her experience, Susi's hard work paid off .. She wrote again to say, "IT'S ON THE BOOKS! The City of Monterey Code includes the Rabies Exemption!! Sec 6-13 has been amended to include the exemption language. The new ordinance went into effect 6/18/10. I'm still waiting for a letter from the Chief of Police giving me the authorization to allow me to pay the dog license.....but hey, it's only been a month. It'll happen....!"

We have to salute Bunny for inspiring her diehard owner to step up and champion for sick dogs in her city. Rock on Susi! Monterey City - you got it right, and you didn't wait to see what Sacramento was going to do with AB2000 (below) before you changed your law. BRAVO.

The state of California is considering AB2000, a bill that would allow for an exemption of a rabies license with a veterinarian's permission. The facebook page of the Rabies Challenge Fund is posting updates.
Posted by Donna at 3:24 PM 13 comments: