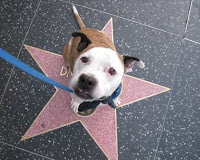 A Mexico-born, scatterbred pit bull who found himself homeless. Sarah, then dog-less and living in Oaxaca, happened to be out on a jog and saw him curled up and lying in the brush by a trail, weak but happy to meet her. Being the animal lover that she is, she brought him to a vet and had him all fixed up.

That was five and a half years ago. 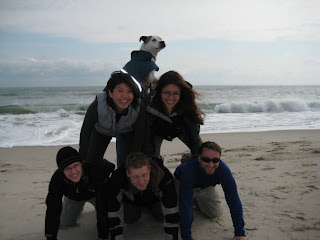 True to form, Tigre's never met a person he didn't fall madly in love with. And, he's dog social to boot, having had to play foster brother to the many stray dogs Sarah brought home and adopted out while in Mexico.

Tigre has traveled to more places than some people. Sarah herself travels often and she never leaves him behind when she moves from place to place. She's flown him home to the midwest, back to Mexico, and over to California for grad school. Now, they're in Washington, D.C., where Sarah's starting her career in the U.S. Foreign Service, getting ready to leave for her first post. When Sarah had to prioritize where she wanted to be posted abroad, she had to carefully research and cross off the places around the world that have banned pit bulls. 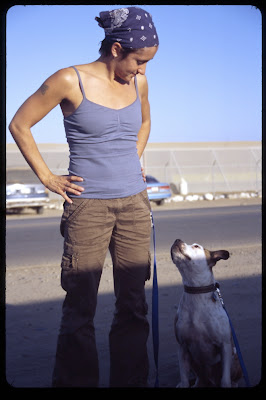 I found Tigre when he was about 1 year old. He was extremely emaciated, anemic and tick-ridden. He was so emaciated that the vet couldn't even tell what breed he was. I've learned so much about pit bulls through the years since having Tigre in my life and have confronted so many people's stereotypes (especially in talking with landlords when looking for places to live!) Tigre is one of the many dogs (and one of several pit bulls) that travel with their Foreign Service owners, living in countries around the world. As we prepare to head off to Pakistan, I look forward to more people around the world meeting him and realizing what kind, friendly dogs pit bulls can be.

Safe travels, Sarah and Teeg!
Posted by Christine at 4:43 PM

What an inspiring story! It's so great you could give a dog like him such a great home.

Two great stories about "Tigers" today- yay for golfing greats and peripatetic pit bulls! I hope you spread good cheer and your silly grin all over the planet- you go, little ambassadog!

Windy and the Pittie Grrls

Class A thugs! Good luck in Pakistan. It's awesome that you get to take him with you to so many countries. Send e-postcards :)

Sarah & Tigre,
DoG bless you and keep you safe in your travels.

Be safe, you two! Happy travels.