what hurricane? Rally strengthens a softie 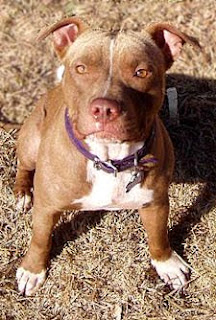 We've been smiling big since watching this video of BR-alum Martin and his person Tina Vickrey navigating a Rally course at a recent competition. They both walked that course with the poise and confidence of champions and earned Martin his RN (Rally Novice) title. (EDIT 9/11 - Tina and Martin just earned their first leg towards a CD (Companion Dog Title) - A BIG accomplishment!) I'm going to let Tina tell us about Rally in an interview below, but first I have to goo some more about her boy....

Martin was a Hurricane Katrina survivor. He had the classically tragic story; found barely alive in the 9th ward in the attic of a house that had floated off its foundation, accompanied by a dead german shepherd. He's a really sensitive dog and was shaken to the core after the storms. It took a lot of mind/body healing before he could function like a normal dog again. (This is what the poor kid looked like when we first met him in LA.) Tina has done an amazing job not only making him strong again, but helping him find the kind of confidence that's needed to compete.
And that's the beauty of dog sports - the teamwork and relationship that a handler builds with their dog can bring the biggest of transformations, and in some of most compromised dogs. I can't even tellya how cool it is to see this little dog smiling and performing like a natural-born champ in this situation. Of course, all credit goes to his devoted and determined (and madly-in-love-with-her-dog) human. Check this out ....

Below, Tina fills in the gaps for us on Rally.

DR: What exactly IS Rally?

TV: Rally is a dog sport designed to be less formal and more 'fun' than regular Obedience. Many use it as a stepping stone into that sport, though Rally is, in and of itself, a sport and offers titles.

AKC Rally is the new dog sport that is taking the nation by storm, a successful stepping stone from the AKC Canine Good Citizen® program to the world of obedience or agility. Rally offers both the dogs and handlers an experience that is fun and energizing. The canine team moves at their own pace, very similar to rally-style auto racing. Rally was designed with the traditional pet owner in mind, but it can still be very challenging for those who enjoy higher levels of competition.

A rally course includes 10 to 20 stations, depending on the level. Scoring is not as rigorous as traditional obedience. Communication between handler and dog is encouraged and perfect heel position is not required, but there should be a sense of teamwork between the dog and handler. The main objective of rally is to produce dogs that have been trained to behave in the home, in public places, and in the presence of other dogs, in a manner that will reflect positively on the sport of rally at all times and under all conditions. 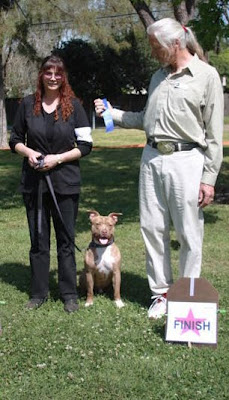 DR: Why did you decide to pursue Rally with Martin?

TV: I watched a friend of mine (Tiffany Blakeman) compete with her Am Staff, Loki. I was so impressed with their team work and how much fun they seemed to be having together that I wanted to try it. I was lucky that she agreed to mentor us and became our trainer.

DR: Did you get any grief for having a pit bull, or did you find support?

TV: Everyone has been super nice at trials. Our dogs usually get a good response since they look so happy to be working. People appreciate that.

DR: It looks like so much fun. How long have you been training to get to where you are today?

TV: We've been training for almost a year. However, Martin is special since he is such a softie boy and has a lot of environmental stressors. He would get so worried in new places that he would get shut down. He also worries - a LOT - about being 'wrong' so we move pretty slow. He LOVES it when he figures it out, then he is very much, "Hey! Look what I can do!" His confidence in new places and situations has really blossomed since he has behaviors to fall back on that are safe to him and make him feel good. Training has been so much fun and a great bonding experience for both of us.

DR: How can a dog owner tell if their dog is a good candidate for Rally?

TV: Rally is a great sport for almost any dog! With the AKC's new Canine Partners program, even mixed breed dogs or dogs who don't qualify for a PAL registration number can now compete. Trials are pretty crowded with people/dogs, so your dog does need to be able to handle having other dogs around. Novice Rally is on leash, but the next two levels are off leash. I really encourage people to give it a try!

DR: What's next for you guys?

TV: Now that he has his RN title (Rally Novice), we will be moving on to Rally Advanced (off leash, more stations). We have our eye on traditional Obedience in the future, though that requires quite a bit of working away from the handler and doesn't allow you to give feedback to the dog during exercises ... Martin needs to hear what a GOOD BOY he is! lol ... so that may not be his cup of tea. If that turns out to be the case, we will be happy with where we go in Rally, since even to be where he is now is a HUGE accomplishment for such a softie dog.
DR: The meek shall inherit the best dog treats, methinks.

Thank you Tina for raising that bar for all of us.
Posted by Donna at 11:11 PM

Oh my gosh. That boy LOVES his momma. You can just see it!! Great story. Thanks for sharing it.

absolutely inspiring!!! From such a horrible tragedy to a confident boy! GREAT JOB!!!!

He really does look so happy. What an awesome pair!

Awww, there's my boy! Martin and Tina are such a great team. Martin is learning to be extra-brave because of Tina's patience and persistence in working through his challenges. Great job, you two!

Martin looks fabulous, Tina you have done a job to be very proud of. He's come a long way and from the looks of it, he's going places.

He looks SOOOO amazingly happy and completely devoted to his mom, as she is to him!! I smiled the whole time I was watching the video.

Tina, congratulations! Please consider CDSP obedience in place of traditional (AKC or UKC) obedience as a stepping stone between rally and competition obedience. CDSP allows you to communicate more with your dog, and also does away with the long sits and downs (there is an honor exercise instead). It is a wonderfully dog-friendly venue, and a great stepping stone for softies like your boy.

OMG, Tina, that is amazing! And that photo of him from NOLA is so poignant.

Awesome job, Tina, and a hearty congrats! It's been really neat seeing over recent time how you have brought Martin along to achieve what you have as a team. I know more good things are in store for you two!

Awesome job, Tina, and congrats! It has been neat seeing you bring Martin along in recent times to get to the level that you have both achieved as a team! I know you have more good things in store that you will accomplish down the road at the competition level.