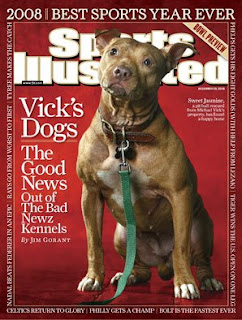 Congratulations to Jim Gorant for winning a 2009 Genesis Award for his Sports Illustrated story, "The Good News Out of the Bad Newz Kennels."

Ironically, the awards are hosted by the HSUS altho the judges cast their votes independently of HSUS' position and policy.

From their webpage: "In large part, animal abuse and exploitation have only received mainstream media attention in recent years. What happened to animals in the past invariably occurred in the dark, behind closed doors .... Every year, the Genesis Awards pays tribute to the major news and entertainment media for producing outstanding works such as these, which raise public understanding of animal issues. As much as film, television, print and the arts reflect societal attitudes, they also help shape and change those attitudes. The mass media have the power to spotlight animal issues to vast audiences—literally at the speed of light.

Genesis Awards entries have been submitted by the public as well as by media professionals. Categories span television, film, print, radio, music, and the arts. The Genesis Awards Committee—via a process of submission, nomination, candidate selection, debate, and secret ballot—makes all final decisions regarding the winners .... The 13 committee members have been selected because of their personal histories in working for the animals, averaging more than 15 years "in the trenches." The members include people from various animal-protection organizations and diverse walks of life, who all share a demonstrated commitment to animals."

As you can imagine, we're thrilled that the story of the Vick dogs' survival and resurrection has been recognized once again for the important story that it is. * WOOT! * Thank you Jim - We hope you're having a good time at the party tonight!
Posted by Donna at 9:34 PM

My friend Wolfie says the wheels of Justice turn slowly, but exceedingly well. I am praying this is - the - beginning of that wheel turning. Here's looking at you guys.

Much deserved! Congrats Mr. Gorant, and thank you again :)

Yay! Congratulations Mr. Gorant, and as always, thank you BadRap for all that you do!

I guess the appropriate facial attire for HSUS at this ceremony would be EGG.

Great article Donna. I LOVE the picture of Daisy with the elderly man. She looks so content with him, and she has truly done her job by bringing a smile to his face.