Team Pibble Dispatch—This Is It!

Hey, EK here, reporting back from training for the Team Pibble triathlon, a fundraiser we're doing for BAD RAP. I'll tell you: I had no idea what I was getting into. As it turns out, my experience riding my bike to BiRite and jumping waves and doing handstands in the shallow end of the pool isn't really the same thing as doing a triathlon—biking 34 miles and running 10 after swimming a mile at top speed with hundreds of other athletes trying to outswim you. I’ve been kicked in the face in the pool, gotten a flat, wrecked on a hill, ridden with a busted derailer, and wanted to quit so many times I have simply lost count of the discouraging thoughts.

During this time, I also adopted my best girl, Stella, the stout little fireplug of a pit bull who came to BAD RAP from . 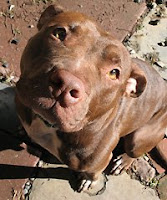 Those of you who don’t know her story might not know what a rough start she got. Rescued in a drug bust, Stella’s freedom came in the midst of guns ablazing, doors kicked in, other (aggressive) dogs let loose around her. The cost of that chaos and whatever unthinkables preceded it took form in Stella’s many residual fears. Stella is shy of new experiences, skittish with big sounds, and desperately afraid of brooms or anything that looks at all like an animal-control catch pole.

With all that she’s afraid of, though, she continues to show a mindblowing faith in me, in the good folks I’ve been bringing over to meet her, and in the routines I’m setting up for her. She’s adapting to her new neighborhood, bravely joining me on walks, softening to the tall friends who previously scared the wits out of her. She will walk past the broom now and has even eaten treats in its company. Stella has proven so forgiving.

This morning as Stella snoozed away before the sun rose, my stalwart teammate Monica came over with all her triathlon gear. We loaded up our bikes, suits, and shoes, and after we walked Miss Stella and settled her back in her crate, Monica and I headed out in our Team Pibble shirts to complete a test-run for the triathlon—an Olympic-distance swim, bike, and run, along with all the transitions among the three. For those of you following the Olympics, we did the same thing these qualifiers from the Vancouver World Championships did at the same distance they'll do tomorrow morning in Beijing. Only they’re a little faster.

Thinking of those women and their superhuman abilities, I was out at the water this morning. It was super still and as I set out my transitions stations, I was seized with this crazy fear. This was the first time we were actually doing a full practice race from beginning to end. We’d only done drills or different parts of it—swim to bike, bike to run. This was the full deal. The fear was kind of mind-frying. It was that rib tightening, hands shaking, electrical current through the whole body kind of fear. I was pacing pacing pacing in my wetsuit when this ridiculously obvious connection just came to me. This is exactly the kind of leap of faith I ask Stella to make every single day. Do the thing you think you cannot do.

These dogs have come into our lives for all sorts of reasons. Maybe your dogs aren't here to teach you to go do stupid things over really far distances in uncomfortably constrictive spandex. But chances are you learn something from them. And that it took work, patience, support, stamina, and—let’s get right to it—resources for you to get them where they are.

Please donate today at www.teampibble.com to help us put more good-hearted Stellas into the loving homes they deserve. See you at Pit Ed and other BADRAP events after the race! Thanks for all your support and love through this crazy training.

Posted by Elizabeth Kennedy at 6:00 PM

Dammit Elizabeth, you made me cry! :-) But seriously, you are SO dead right that animals come into our lives for a reason.
Kudos to you, girl! And hugs to brave little Stella.

Watching that VWC's vid shows us why you are so mixed-up emotionally. Fun painting numbers on your body, scarry to have to run barefoot until you find your shoes, and real cool to talk in foreign accent when you get interviewed after.

Hey seriously, take your time putting on your shoes for safety sake, using the time wisely to catch your breath. Remember to do what you expect from Stella girl, keep your mind on your business and don't worry about what others think/do.

Stella -- hope to see you soon in a Pibble T.

What a neat story! Good luck to you and sweet little Stella!